Twelve Days in the Territory 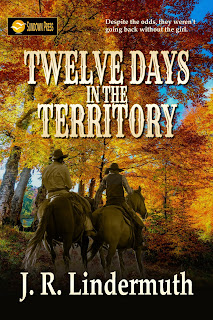 Indian Territory in 1887 is the setting for Twelve Days in the Territory, my latest novel.

Outlaws take Martha Raker hostage and flee with her into the territory after a botched robbery. Martha is the niece of Isaac Gillette, the local sheriff, who is determined to track them down and bring her home. Martha is also the sweetheart of Will Burrows, a school teacher, and he is the only person willing to join the sheriff on his mission.

"Gillette wasn't thrilled to find the school teacher as the only person willing to accompany him on this dangerous enterprise. Still, it didn't entirely surprise him. Much as it irked him to admit it, Will Burrows had as much reason to pursue the killers as he did.

"But did the lad have the sand to see the job through? Gillette didn't know. Aside from observing the boy in Martha's company, he knew little about him. He'd never seen Will with a gun, nor did he recall ever hearing of him in a fistfight or even a shouting match with another person. Cole had personified the boy as a sissy in a few remarks, but then Cole and Will had been in competition for Martha's attention. And Cole had lost that battle; naturally he would be bitter and not apt to portray his rival in a good light."

Indian Territory was the government's dumping ground for the tens of thousands of Native Americans uprooted from their homelands coveted by settlers and greedy entrepreneurs. It didn't matter to officialdom that many of these people forced into juxtaposition with one another were mortal enemies. And, though the area was supposed to be a home for the tribes, by 1887 the territory had also become a refuge for outlaws and renegades. Cattle trails and railroads were crossing in response to eastern market demands and rich mineral, timber and land resources were drawing the attention which would soon lead to land rushes opening expanses of the territory to non-Indian settlers.

Indian Territory covered some 74,000 square miles. Gillette and Will have a big area to cover. Complicating their mission, Gillette has no jurisdiction in the territory; he's an intruder despite his badge. There were Indian courts and tribal police, but they had no authority over cases involving non-Indians. Normally, deputy marshals would have been dispatched from Fort Smith in pursuit of the outlaws holding Martha.

Gillette isn't inclined to wait for someone else to do the job, and neither is Will.

Martha is certain her uncle and Will are on their trail. Meanwhile, she's also doing something about her situation. She's leaving a trail for Will and her uncle to follow, she's paying close attention to the conversations of her captors, and she's taking advantages of opportunities for escape.

You can grab a copy of the book in print or electronic format here https://www.amazon.com/gp/product/B0929FBTKP/ref=dbs_a_def_rwt_hsch_vapi_taft_p1_i6

Posted by jrlindermuth at 6:04 AM