Sheriff Sylvester Tilghman, that is. Syl is the third of his family to serve as sheriff of the small Pennsylvania town of Arahpot in the waning days of the 19th century.

Syl first appeared in the cozy mysteries Fallen From Grace and Sooner Than Gold, published by Oak Tree Press. After the death of Billie Johnson, Oak Tree publisher, I regained the rights. I'm happy to say Lawrence Knorr, my publisher at Sunbury Press, agreed to reissue them under the Milford House imprint. Lawrence published The Bartered Body, third in the series, in 2018.

We'd hoped the books would have been out sooner, but the pandemic and other issues slowed the process.

Fallen From Grace and Sooner Than Gold are now available from Sunbury Press and soon will be offered from Amazon and other popular outlets as well.

As Fallen opens, Syl is a man focused on two problems--finding a new deputy and convincing Lydia, his true love, to accept his latest marriage proposal. The murder of a stranger in town suddenly makes his life more complicated.

In Sooner he confronts a murder victim with too many enemies, a band of gypsies hunting a man who stole one of their young women, a female horse thief, and other problems.

The books were popular with readers in their first inception and I believe, for those who haven't read them, lovers of cozy and historical mysteries will enjoy them. Oh, and I might mention, By Strangers Mourn'd, a fourth book in the series will be coming next. 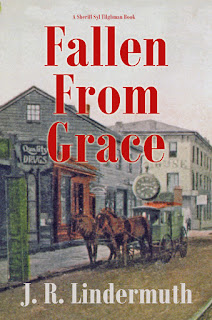 Posted by jrlindermuth at 6:28 AM