Here's to You, Dad 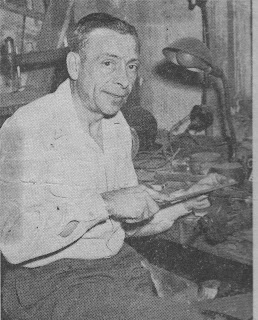 The Christian bible (and tenets of other religions) admonishes us to honor our fathers. Unfortunately, it’s taken us awhile to get around to it.

For instance, a day to honor them was first proposed in the U.S. in 1910 by Sonora Smart Dodd, a Spokane, WA woman who thought fathers deserved equal recognition with mothers. But when President Woodrow Wilson suggested making it a national observance a few years later Congress balked, contending it would become commercialized. (Can you imagine Congress today missing an opportunity to commercialize anything?)

Sen. Margaret Chase Smith of Maine chastised Congress in 1957 for ignoring fathers while paying tribute to mothers. In 1966 President Lyndon B. Johnson issued the first presidential proclamation. But it wasn’t until 1972 that it finally became a national holiday, signed into law by President Richard Nixon.

To say we have been remiss in failing to equally honor both our parents would be an understatement.

My Dad’s been gone 26 years now, but I don’t think there’s a day goes by that doesn’t remind me in some way of his character and guidance. I may not always have followed his advice. Yet, looking back on it now, I realize how often his judgment was right.

Dad was a railroader most of his working life, a rough and demanding occupation. He grow up in a tough and ethnically-mixed neighborhood in which he learned to use his fists as well as common sense and picked up a smattering of several languages. Dad also loved music and taught himself to play a number of musical instruments. He and my mother also had a local reputation as ballroom dancers. While my sister inherited some of this musical ability I missed out on that gene. I also love music, but I get static even trying to play it on the radio. As to dancing, I’m better at tripping over my own feet.

He was also one of the most creative people I’ve known. When my sister and I were young he spent many hours in his shop creating sulphur diamond jewelry and coal novelties which he sold to supplement his income. With the decline of deep mining, material for those pursuits became difficult to get and he turned his attention to ‘picking’ and restoring/refinishing antiques, an enterprise in which I joined him. We shared many happy hours attending sales and scouring the countryside for goods. This largely replaced the comradeship we had enjoyed earlier in hunting, fishing and camping and continued until I went off to the Army.

I cherish the fact we had those times together. I’m also glad he lived long enough for my children and my nieces to know him. He had a temper, never shirked saying what he felt and couldn’t stand a hypocrite. You always knew exactly where you stood with him and, if you were his friend, you couldn’t find a more loyal one.

So here’s to you, Dad. I’m not contributing to Hallmark’s bounty for a sloppily sentimental card. But I hope you know how much we love and miss you.
Posted by jrlindermuth at 2:07 PM No comments:

If you’ve read and enjoyed any of the Sticks Hetrick mysteries, you’ll be pleased to know Whiskey Creek Press soon will release BEING SOMEONE ELSE, fourth in the series.

If you haven’t read them, now’s a good time to start. The novels are available in print and electronic form, including Kindle. Other novels in the series are Something In Common, Cruel Cuts and Corruption’s Child.

As a note of interest, Hetrick—a longtime widower—has a new woman in his life in this novel and is offered a new job.

And, in case you’re wondering, I’m already at work on the fifth in the series.

Here’s the back cover blurb from Being Someone Else:

Some believe violence foreign to our nature. Dan ‘Sticks’ Hetrick, retired chief and consultant to the Swatara Creek police department, knows better. We put a lid on our natural tendency to violence when we started living in groups, devising moral codes to hold it in check and allow us to live in harmony with others. But, deep down in the Id, there’s always that tendency to violence.

When an out-of-state reporter is found murdered at a disreputable bar, the tendency to violence spirals in the rural Pennsylvania community, and the investigative trail keeps bringing Hetrick and his team back to the family of a wealthy doctor who has come back to his hometown in retirement.

Hetrick and his protégé, Officer Flora Vastine, are joined by an old friend from his State Police days as they unravel old secrets and mysteries in a tale with as many shocking twists as a country road
Posted by jrlindermuth at 4:57 AM No comments: 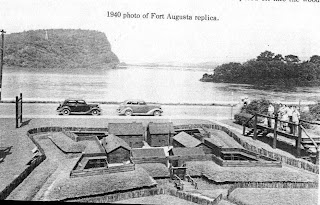 History too often gets a bad rap.

Students dismiss it as boring. Politicians and others with a biased agenda abuse its factuality. But the truth is out there and available to any willing to take the time to search. Since that involves time and effort, history is either ignored or perverted.

The poet Abram Joseph Ryan who penned those lines recognized that history is based on memory. Though not always accurate, history is important to a society. Thucydides rightly called history philosophy learned from examples.

As Soren Kierkegaard so aptly put it, “Life can only be understood backwards; but it must be lived forward.”

As a writer and genealogist, I devote a lot of time to the study of history. Several recent events raised my optimism about public perception of history and its value.

Our historical society is located in the home of the last commandant of Fort Augusta, Pennsylvania’s largest provincial fort, which was commissioned for the French and Indian War and used through the Revolutionary War. Volunteers logged many hours to transform our former exhibit space into a more detailed interpretation of the importance of this historic site and the life of those who lived here.

Dedication of the new exhibit attracted more than 400 people and we have had a steady stream of requests since for group tours for families, clubs and school and scouting groups. The first of four scheduled Living History Days at the site of Fort Augusta was also successful and well attended.

Over the Memorial Day weekend my hometown of Shamokin held the fifth annual Anthracite Heritage Festival of the Arts, which also attracted larges crowds. While there’s plenty of emphasis on food and fun, history is not neglected in the mix which celebrates the mining heritage of the region and its polyglot ethnic society.
Posted by jrlindermuth at 4:42 AM No comments: