The Evolution of a Character

(This essay is included in the latest issue of Mystery Readers Journal, Small Town Cops II, along with a full slate of articles of interest to those who enjoy mysteries set in smaller communities)

I'm the author of the Daniel 'Sticks' Hetrick crime series, set in a small, fictional community near Harrisburg PA. There are currently six novels in the series and the seventh was published on Sept. 16, 2016 by Torrid Books, a division of Whiskey Creek Press (Start Publishing).

I've published 15 novels (including the Hetrick series) and a non-fiction regional history book. My short stories and articles appear regularly in a variety of magazines. Though I'd used him previously in a short story, Sticks made his novel debut in 2006, four years before my own retirement after 40 years as a newspaper reporter and editor.

Sticks is the focus of the stories, but other members of his team (like his proteges Flora Vastine and her boyfriend, Cpl. Harry Minnich) as well as a few town characters get their stage time. Fans seem to like that I offer this approach and reveal the lives and concerns of ordinary officers and their families in addition to the procedural and forensic detail. The bits of humor (dark, of course, in keeping with the theme) and romance hasn't turned any off to my knowledge either.

In Something In Common Hetrick's bored in retirement and offers himself as unofficial consultant to his less experienced successor, Aaron Brubaker, who's perplexed by a recent murder, the first on his watch. Sticks discovers the murder is linked to a major theft of rare ornithological books and the trail leads from the big city to his hometown. The discovery forces him to confront danger and the darker side of his community and its residents.

Corruption's Child, which follows, has Hetrick and his colleagues investigating the murder of a local waitress and an elderly Amish man, the latter mortally wounded in the latest in a string of burglaries from the Amish.

Being Someone Else, a tale of identity theft: When an out-of-state reporter is found murdered at a disreputable bar, the tendency to violence spirals in the rural Pennsylvania community, and the investigative trail keeps bringing Hetrick and the team backs to the family of a wealthy doctor who has retired in his hometown.

Practice To Deceive, next in the series, splits locations between Sticks and the team. Hetrick, a widower, and Anita Bailey, the new woman in his life, go on a Caribbean cruise. When a passenger is murdered, Sticks is drawn into the case and works with the Jamaican officer in finding a solution and a killer. The cruise was intended to be a vacation before he began a new job as a county detective, working out of the same office as Anita, a deputy prosecutor.

Meanwhile, back home, Flora and the team are probing mysterious assaults on young women.
Both Sticks and Flora will learn the past has consequences which can't be denied.

The sixth in the series, A Burning Desire, takes arson to murder. Sticks and Flora confront dangerous people from their pasts, and errors in judgment add to their jeopardy.
Shares The Darkness, the seventh, is about the murder of a birder in a patch of woods on the outskirts of town. Here's the blurb:
Jan Kepler and Swatara Creek Police Officer Flora Vastine were neighbors and schoolmates, but never close.
When Jan, a school teacher, avid birder and niece of a fellow officer, goes missing and is found dead in a nearby tract of woods Flora finds herself thrust into the middle of an examination of the other woman's life, as she searches for clues.
As usual, the police have more than one crime to deal with. There’s illegal timbering and a series of vehicle thefts taking up their time. And there are other iss to deal with. Flora is concerned there’s some shakiness in her relationship with Cpl. Harry Minnich who seems to be making a lot of secretive phone calls.
Still Flora maintains focus on the murder. Despite evidence implicating other suspects, the odd behavior of another former classmate rouses Flora’s suspicion. Flora’s probing opens personal wounds as she observes the cost of obsessive love and tracks down the killer. 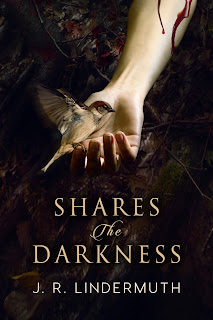 Posted by jrlindermuth at 7:57 AM 3 comments: