What I've Been Reading It

This is an assessment of books read in the past month. I may make this a regular blog feature, provided people find it of interest.
The books:
James Oliver Curwood--The Valley of Silent Men.
Ngaio Marsh--Killer Dolphin.
Judy Sheluk--Skeletons in the Attic.
Juli Zeh--Decompression.
J. M. Lee--The Investigation.
E. S. Thomson--Beloved Poison.
Jonathan Yardley--Misfit.
As a youth, I was an avid fan of Curwood's adventure tales set in the Far North. On a whim, I downloaded a Kindle copy of his The Valley of Silent Men to see how his work stands with me now. Unfortunately, despite an intriguing plot that kept me turning pages, I found myself irritated by his flamboyant style and abuse of the exclamation point.
I also hadn't read Marsh in many years but am now inspired to read or re-read more of her work. Killer Dolphin allowed her to indulge in her love of theater. This, the 24th in her Roderick Alleyn series, focuses on a glove alleged to have belonged to Hamnet Shakespeare and the skulduggery it inspires. If you're a fan of Agatha Christie and haven't read Marsh, do.
I gave Skeletons in the Attic a five-star review. If you enjoy small town mysteries with feisty heroines, a cast of quirky characters, well-paced plots, twists and turns and a bit of romance, this is a book you'll want to check out. https://www.amazon.com/gp/review/R3K23XEWQNO940?ref_=glimp_1rv_cl
Fueled by an interest in deep sea diving, I expected to enjoy Decompression more than I did. I gave it three stars. Zeh tells the story from the viewpoint of the three main characters, Sven, a dive instructor; Jola, an actress who hopes to land the role of a pioneer woman diver, and Theo, a struggling writer and Jola's lover. It was difficult to tell who told the truth and, frankly, I couldn't work up much sympathy for any of them. Review here: https://www.amazon.com/gp/review/R2C9BI8WL8CODX?ref_=glimp_1rv_cl
The Investigation also rated five-stars. Lee is one of South Korea's top writers and this is his first novel to be published in the U.S. It involves a murder during World War II in Japan's notorious Fukuoka Prison. A majority of the prisoners, including famed poet Yun Dong-ju, are Koreans accused of fomenting rebellion against their Japanese conquerors. Review: https://www.amazon.com/gp/review/R1FLB3SYYWA7FB?ref_=glimp_1rv_cl
Beloved Poison was another five-star read. I'm fascinated by the Victorian era and grew up reading classics from the period. In this debut novel, Thomson evokes the age and provides fully-developed characters with names right out of Dickens, a gripping plot and a distinct sense of place. Review: https://www.amazon.com/gp/review/R2AAU1SZZ55SY3?ref_=glimp_1rv_cl
Yardley's stellar biography follows writer Fred Exley's alcoholic trail from his birthplace in football-dominated Watertown, N.Y., across the U.S. as he sponges on friends and strangers and achieves fame if not fortune. Yardley characterizes Exley as a "one-book author," centering his attention on "A Fan's Notes," the first and best known of his three "novels." That may be true but I found "Pages From a Cold Island" and "Last Notes From Home" entertaining expansions on the first autobiographical entry.
So, that's the books for this time. What am I reading now?
Loren Estleman--Detroit is Our Beat.
James Lilliefors--The Psalmist (first in the Bowers and Hunter mystery series).
Rob McCarthy--The Hollow Men.
Ian Mortimer--Millennium.

I grew up listening to radio. We didn't have a television until I was in high school.
If you had the experience I think you'll agree, radio gave us something the TV generation missed out on. Listening to radio inspired more use of imagination than that required by the visual media. I'm not saying television viewers lack imagination.
The point is radio, as in reading, requires the listener to imagine the scene, create the speaker in his mind--'pictures' and sound that are more personal than those projected visually. Who can forget that squeaking door and the eerie organ music of 'Inner Sanctum'? Or the sonorous voice of 'The Shadow'? Do you see The Whistler? 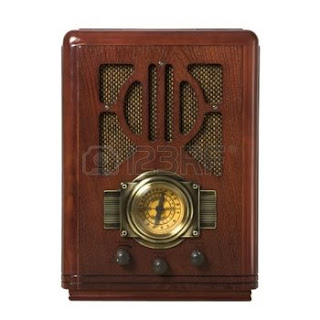 I believe listening to those old time radio shows was as much an incentive as my youthful reading in inspiring me to want to write my own stories. Willa Cather said much of the material a writer uses is acquired before the age of fifteen.
I spent a lot of time listening to those old radio shows in those teen and earlier years. These included Inner Sanctum, The Whistler (noted for its unexpected twists at the end), Mr. and Mrs. North, Boston Blackie and many others. One of my favorites was 'I Love a Mystery,' about three friends who ran a detective agency and traveled the world in search of adventure. It originally aired from 1939 to 1944 and then was revived and ran from 1948 to 1952. I was too young for those earlier episodes, but many are still available online.
The Shadow, one of the most popular of radio shows, ran from 1930-1954, prompted a magazine and a series of novels. The opening line is haunting, "Who knows what evil lurks in the hearts of men? The Shadow knows."
Mr. Keen, Tracer of Lost Persons, was another popular show and one of the longest running, 1937-1955.
The radio version of The Thin Man, based on Dashiell Hammett's novel, ran in 1936, before I was born, but I've seen the film and the TV adaptation. William Powell and Myrna Loy reprised their film roles in the radio show but were replaced by Peter Lawford and Phyllis Kirk on TV.
Of course mysteries weren't the only shows I listened to. There were also many good Westerns, comedies and drama. Still, mysteries remain my favorite.