Fact And Fiction On The Flu

(My guest today is J. L. Greger, scientist/novelist, who shares some interesting information and an introduction to her latest book. The floor is yours, my friend:) 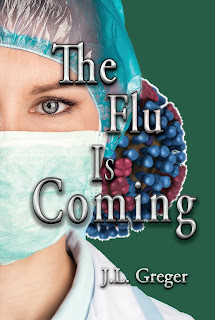 The flu epidemic of 1918-19 is the largest pandemic ever. One-third of the world population was infected and 20 to 50 million people died. Although it is sometimes called the Spanish Flu, it probably first developed in or near a military base in Kansas.

This epidemic inspired not only many scientists but also many authors of fiction.

First, the science. In 2005, scientists reconstructed this H1N1-type flu virus that caused the 1918 epidemic. They believe at least a portion of the human population has some residual immunity to this or similar viruses. That means the virus that caused the 1918 epidemic probably could not cause another epidemic. BUT new mutations of avian or swine flu viruses could create a new flu virus transmittable among humans. In that situation, humans might have no residual immunity to the virus and another pandemic could occur.

Now the fiction. Epidemics are the basis of many famous novels and movies. Consider: The Stand by S. King, The Plague by A. Camus, Arrowsmith by S. Lewis, World without End by K. Follett. Generally, the medical details are incorrect in these novels, and the epidemics resemble a mix of cholera, plague, and flu.

Authors have used the epidemics so frequently in fiction because epidemics are urgent situations which bring out the best and worst in their characters. Probably, the most interesting use of the 1918 flu epidemic was in Downton Abbey. It was a way to eliminate lady’s Mary’s rival for the attention of Matthew Crawley.

The most realistic view of an epidemic occurred in the 2011 movie Contagion. However, this movie didn’t allow viewers to develop much sympathy for victims. The Flu Is Coming realistically portrays what would happen if a new virulent flu virus struck but allows readers to have empathy not only with patients and medical personnel treating patients but also scientists and police trying to control the spread of the flu.

Prescription. Try it, ,you’ll like learning a bit of science on drug development while you’re frightened by the quarantine and what it unleashes among residents of a small community.

Blog: In The Flu Is Coming, a new type of flu — the Philippine flu — kills nearly half of the residents in an upscale, gated community in less than a week. A quarantine makes those who survive virtual prisoners in their homes. The Centers for Disease Control recruit Sara Almquist, a resident of the community, to apply her skills as an epidemiologist to find ways to limit the spread of the epidemic. As she pries into her neighbors’ lives, she finds promising scientific clues but unfortunately learns too much about several of them.

Bio: J.L. Greger is a scientist and research administrator turned novelist. She likes to include tidbits of science in her award-winning thriller/mystery novels: Murder: A Way to Lose, Riddled with Clues, and others. To learn more, visit http://www.jlgreger.com