An Interview With Joan C. Curtis

My guest today is Joan C. Curtis, an award-winning author of five books and numerous short stories. Welcome, Joan. Let me kick this off by asking have you always wanted to write, or was there some transforming event led you to it?

In ninth grade I wrote a play based on the Tale of Two Cities. I was always the kid who came up with ideas for games, shows, etc. My dad was an artist. I didn’t inherit his talent for painting, but perhaps I inherited his creative spark.

Tell us about your path to publication.

I’ve had a convoluted path to publication. My first published piece was in Reader’s Digest (My story won second place in a national contest and the editor asked me to get in touch). Later, as I struggled to find an agent for my fiction, I wrote a proposal for a nonfiction piece. That proposal won first place in another contest and later became my first published book. From there I went on to publish (with the same publisher) 4 more nonfiction books. Meantime, I continued to write fiction off and on.

Finally, after deciding to stop writing nonfiction and to focus on fiction, I began  searching for a small press. (Looking for an agent was not getting me anywhere). The Clock Strikes Midnight was accepted within two months.

Contests seem to have played an important role in your career. What advice would you give others about entering contests?

I advise my coaching clients as well as aspiring writers to enter contests. (So long as they are not too costly—no more than $80). You don’t enter to win, but you enter for two other very good reasons: 1) Get your work done. The contest usually has a deadline. 2) Get someone else to read your work. Some even offer feedback. And, who knows, you may win!

Writers are often driven by curiosity. Is there any particular subject that especially arouses your curiosity?
That’s a tough question, John. I tend to be a very curious person. Many subjects arouse my curiosity. When I was writing nonfiction, I quickly realized that I didn’t know everything. There’s much learning that goes on in the writing process. Once you publish a book—say on how to interview candidates--, people think you’re the “expert.” Instead, I’m the learner who spent time researching and then put that knowledge down on paper. With fiction I stay curious as to where my characters are going to take me. It’s a mystery till the end.

Are you an outliner or a pantser? How do you actually go about writing a story or book?
I tried to be an outliner, but that’s just not me. I had never heard the word, pantser, until recently when I began interviewing writers. I have to say, I don’t care for that word. I describe myself as an evolutionary writer. My stories evolve as I go, often at the direction of the characters who themselves evolve. When I wrote the mystery series (the first will be published in the spring 2015), I began with an outline. I felt with a mystery I needed to know where I was going. I have to say, however, I soon deviated from that outline. The only thing that stayed as planned was the murderer. Of course, as other writers know, for an evolutionary (or pantser) writer, like me, editing is a nightmare!

Marketing is one of the tougher challenges facing writers these days. What methods have you found useful in this regard?
I’m new at the marketing for my books. I was not terribly diligent with marketing my nonfiction books. In today’s world the writer must be a very active marketing participant. One of the best things to do is to create and maintain an active blog with lots of useful information. That blog will attract attention and hopefully help create a platform. I use Twitter a lot and Facebook. I’ve just started playing around with Pinterest and Wattpad. Balancing marketing with your writing is a constant struggle. BTW, I’m participating in many radio interviews over the next 2 months before and after my book launch. I don’t know how helpful that will be. We just do the best to get the word out with as many tools as possible.
What do you love most about being a writer?
I love creating the stories. I love letting my mind disappear into another world. I love it that the bulk of my work time is consumed with writing and reading.
What’s next on your writing agenda?
In the spring of 2015, my publisher will release the first mystery series starring Jenna Scali. The title is e-Murderer. I am currently working on the second book in that series.
What are some of the things you enjoy doing when not writing?
When I’m not writing and reading (my favorite pastimes), I love traveling, particularly to . I also love going to concerts and the theatre and out to dinner with friends.
Is there something about you it might surprise your readers to learn?
I’m a very open person, as my Facebook page illustrates. Perhaps it would surprise them to learn that although I’m also a very social person, I am not that way in the morning. In the morning, I prefer quiet—Please do not talk to me! Allow me to sip a strong espresso, read my book but above all, leave me alone.
Tell us about your latest book and where readers might find more information about you and your projects.
Here’s the blurb for The Clock Strikes Midnight
The Clock Strikes Midnight is a race against time in a quest for revenge and atonement. This is a story about hate, love, betrayal and forgiveness.

If you found out you had only 3 months to live, what would you do? That’s the question Janie Knox faces in this fast-paced mystery full of uncertainty and tension that will surprise you until the very last page.

Hiding behind the façade of a normal life, Janie keeps her family secrets tucked inside a broken heart. Everything changes on the day she learns she’s going to die. With the clock ticking and her time running out, she rushes to finish what she couldn’t do when she was 17—destroy her mother’s killer. But she can’t do it alone.

Janie returns to her childhood home to elicit help from her sister. She faces more than she bargained for when she discovers her sister’s life in shambles. Meanwhile her mother’s convicted killer, her stepfather, recently released from prison, blackmails the sisters and plots to extract millions from the state in retribution. New revelations challenge Janie’s resolve, but she refuses to allow either time or her enemies to her stop her from uncovering the truth she’s held captive for over 20 years.
Readers can find out about me and my books at my website: http://www.joancurtis.com I’d also invite them to visit my blog: http://www.joancurtis.com/blog

My book is at all the major outlets, including Amazon where it can be pre-ordered for $2.99 right now at http://www.amazon.com/Clock-Strikes-Midnight-Joan-Curtis-ebook/dp/B00NUGACKO/ref=sr_1_1?s=digital-text&ie=UTF8&qid=1412178637&sr=1-1&keywords=the+clock+strikes+midnight

Readers interested in getting a taste of my writing can visit my website and sign up for the first 2 Chapter of The Clock Strikes Midnight. OR, they can visit me on Wattpad where I posted one chapter and a prize-winning short story. 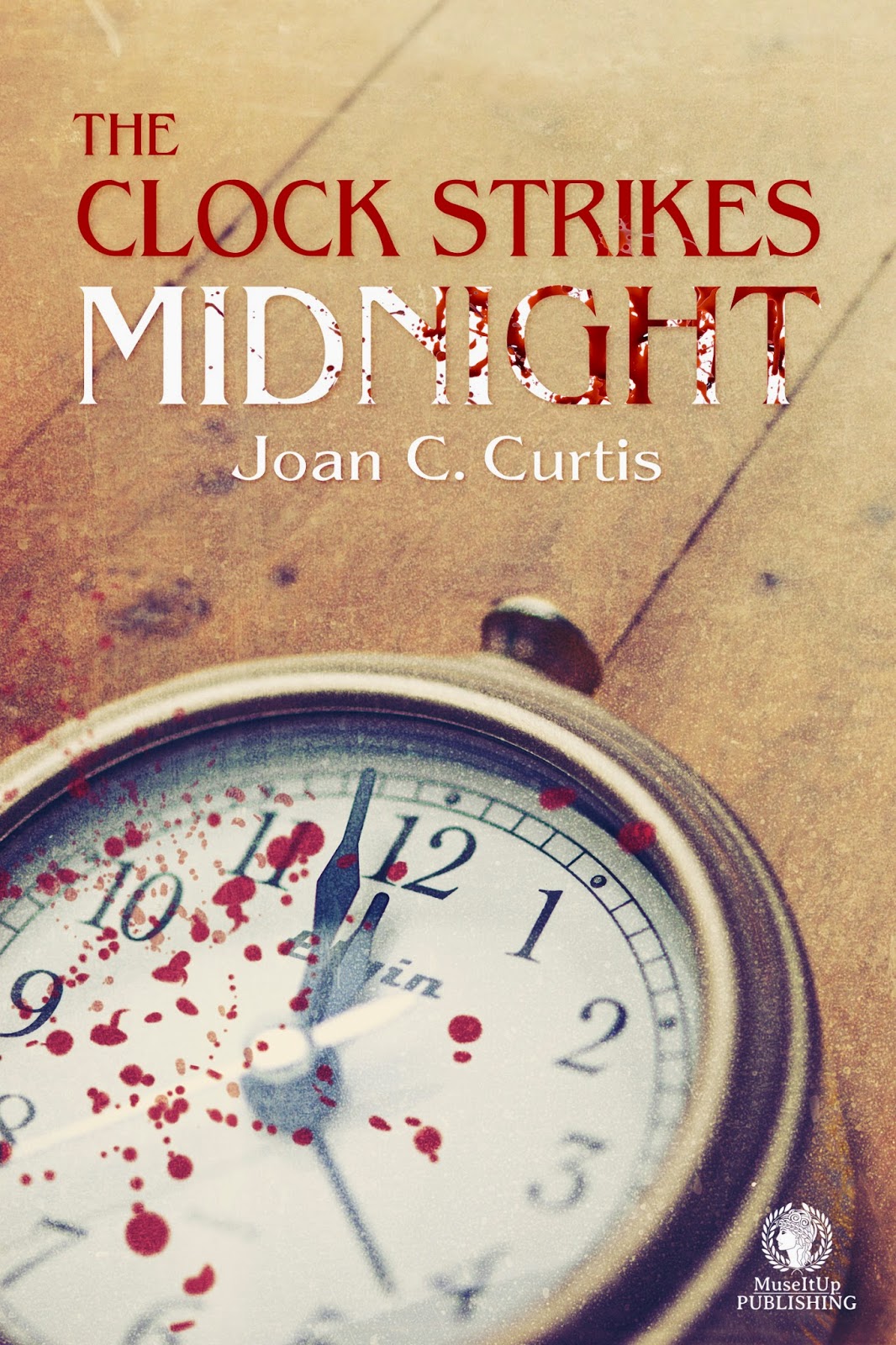 Posted by jrlindermuth at 5:11 AM 6 comments:

Pennsylvanians were shocked recently when a 10-year-old boy was charged in the murder of an elderly woman. Many viewed it as a disturbing sign of the times.

Shocking? Yes. Unique to our times? Unfortunately, no.

Murders by children are not limited to our historic period. In fact, there’s the notorious case of William Newton Allnut which occurred on this date, Oct. 20, in 1847. William, a lad of 12, was charged in the arsenic poisoning of his grandfather, Samuel Nelme, in .

Young William confessed he had sprinkled arsenic on his grandfather’s food in retaliation for the old man having struck him and threatened him with death. At his trial in the Old Bailey, ’s criminal court, it was discovered others in the household, including the boy’s grandmother, had also become ill, apparently due to arsenic poisoning.

Doctors who examined him declared the boy to be of unsound mind, testifying he spoke of voices in his head and other symptoms attributed to mental disease. The surgeon at Newgate Prison disagreed and, subsequently, William was sentenced to death. The sentence was commuted to transportation and he was sent to where he later died of tuberculosis.

William’s case is not a solitary example. Nor are such crimes restricted to one sex or a single country.

Mary Flora Bell of , strangled a child to death in 1968, the day before her 11th birthday. Two months later she and a 13-year-old friend, Norma Joyce Bell (no relation), strangled to death another little boy.

Anne Perry, known for her Thomas Pitt and William Monk novels, then 15, was convicted of participation in the murder of a friend’s mother in 1954 in . She changed her name and began writing after serving her sentence.

Willie Bosket of was accused of “several thousand” crimes before he reached the age of 15 when he murdered another boy and two men to “see what it was like.” His crime spree led to the “Willie Bosket Law” which allowed juveniles as young as 13 to be charged as adults.

Jesse Pomeroy was 14 when he was charged with the murder of a four-year-old boy in . Authorities learned later he had also killed a 10-year-old girl and buried her body in his mother’s cellar.

Horrifying? Yes. Unique? No.
Posted by jrlindermuth at 7:01 AM 11 comments: