James Patterson--love him or hate him?

There’s no denying James Patterson is a phenomenon in the modern world of writing.

Reportedly, one in 17 of all novels sold in the U.S. today bears his name and he generally outsells Stephen King, John Grisham and other big names in fiction. Only a fool would not admire him for his contributions to literacy, his efforts to save bookstores and libraries.

Yet, he seldom writes a book himself these days, churning out plots and handing over the actual writing task to a stable of auxiliaries.

Personally, I preferred the early books he wrote himself like The Thomas Berryman Number and the first Alex Cross novels. And I admit, I haven’t read much of his more recent output. Note, this isn’t the result of jealousy.

He, himself, acknowledges he’s not a great writer. He’s more of a plot-master and is definitely a great storyteller, virtues in and of themselves. Nor is he the first writer to work with assistants and collaborators. One of my favorite writers, Alexandre Dumas, the elder, who like Patterson was a fabulous marketer of his work, employed the same tactic (though the writing style of the two men is world’s apart).

Patterson worked for years in advertising and it is as a result of that experience, as much as writing ability, that contributes to his success. He knows marketing and exploits it in every way possible. He treats his work as products, not works of art. That is not meant as a negative.

His “product” wouldn’t sell if it didn’t have something to attract and retain readers. The man knows and utilizes story arc. He knows how  to grab and hold onto an audience, one always eager for more of his work.
Though I liked that first novel of his, it is vastly different from later output. While the latter often appear more like sketches or TV scripts than novels and the first was more complex and descriptive, Patterson found his formula and it works for him.

I’m not saying we should imitate all he does but, rather, suggest he does have merit and it doesn’t hurt to consider adapting some of his ideas from time to time.

Rustling Not Restricted to the Wild West

Rustlers generally make on think of the Wild West. But an incident in Shamokin, Pennsylvania, in 1894 makes it clear they existed here in the Wild East as well.

Pat Love, who lived at Vine and Commerce streets in that year, had a fine spotted cow who was wont to graze contently along the streets and byways of the community. According to a report in the Tuesday, Sept. 4, 1894 edition of The Evening Item, Sunbury, “She was turned out as usual last Saturday and was seen at different times during the day until 2 p.m. when she disappeared.

“As evening approached the cow always went home but on that particular evening failed to show up. Mr. Love mistrusted that she had been stolen and at once began a search. In a short time inquiry revealed the fact that the cow had been led away by some man. Love went to the law and W. H. Wagner was deputized to seek the thief. He traced man and cow to Bear Gap and from there over the mountain to Danville. From there the trail led over the river bridge and along the towpath to the Halfway House where the thief arrived Sunday morning, having driven the cow 35 miles by a circuitous route. The Item reported the rustler remained there until evening and then again started off cross-country, headed toward Chillisquaque and sleeping in the woods along the way.

On Monday morning after failing in several attempts to sell the cow, the thief succeeded in persuading Joe Wolfe, a Chillisquaque trucker, to buy her for $12.

Deputy Wagner arrived about an hour later. He notified Love who came to Wolfe’s, identified his property and took possession of her. The Item’s article concluded: “They took her to Northumberland Monday evening and started for home Tuesday morning, going through Sunbury about 8:30. Mr. Love was pleased that he recovered the cow but said he would like to get his hands on the thief.”

Cattle were not the only target of such thieves. There was a time when horse theft was the number one crime at Eastern State Penitentiary, Philadelphia. Among those incarcerated at the famous lock-up was Joe Buzzard of the notorious Buzzard brothers gang who terrorized the Commonwealth's Welsh Mountains from the late 1800s till the mid-1900s. Joe, youngest of the gang, considered himself the premier horse thief in the country. He was the only horse thief in custody when he entered Eastern for the last time in 1939.

Rustling plays a major role in my Western, "The Tithing Herd." If you like the genre, you'll find the novel at http://www.amazon.com/Tithing-Herd-J-R-Lindermuth-ebook/dp/B00XQK881Y/ 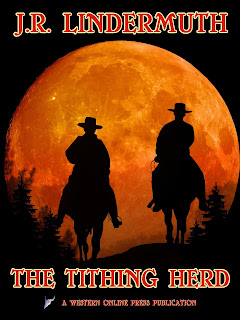