As the year winds down, I like to assess the books I've read and make some recommendations.
To date in 2017, I read (re-read in some cases) 61 books--a mix of fiction and non-fiction. Among acclaimed writers new to me with whom I got acquainted through several books were Ann Cleeves and Louise Penny. The month isn't quite up, so I may complete a few more reads.
Here then, in no particular order, are books I'm recommending to friends:
Fool's River by Timothy Hallinan. This is the eighth in his Poke Rafferty series. His obvious love for the Thai people shines on every page. Hallinan creates living, breathing characters and plots to keep one guessing and flipping pages. He depicts life in Thailand as one who is familiar with both the respectable tourist scene and the seediest districts of Bangkok. His characters are pragmatic people who have learned to live with corruption. There's violence, but also empathy, pithy dialogue and quirky humor.
Wanted: Dead by Wayne D. Dundee. Bounty hunter Bodie Kendrick is on the job again.
Only this time around (in the fifth book of the series), Bodie isn't intent on bringing bad guys to justice. Instead it's his job is to protect Tyrone Avery, a man fresh out of jail and with a $50,000 price on his head. If you have yet to read a Bodie Kendrick story, you owe it to yourself to grab one now. And this is as good a place to start as any. Trust me, you'll want to read the rest, too.
The Hemingway Files by H. K. Bush. It's a brilliant first novel with intriguing characters and situations, suspense and romance. If you love a book that will pull you in and continue to haunt you afterward, you'll want to read this novel.
Yellow Bird: A Webb Sawyer Mystery by Douglas Quinn. As always, Quinn has crafted a fast-moving, entertaining plot with colorful characters, a realistic North Carolina setting, a bit of humor and plenty of twists to keep the reader guessing. I think this is the fifth in his popular Sawyer series. Concern for an aging relative is Webb's route to troubling crime in this episode.
The Peacemaker by Andrew McBride. Up for an exciting western? Andrew McBride has crafted a gripping adventure tale with sympathetic characters and a secure sense of time and place. Well researched. Recommended to all who enjoy a good tale.
The Coroner's Daughter by Andrew Hughes. Another absorbing Victorian drama by the author of the brilliant The Convictions of John Delahunt. Hughes presents a canvas with likeable, realistic characters; a glimpse into early 19th century Dublin, a gripping plot that kept me turning pages and a satisfying conclusion.
A Rising Man by Abir Mukherjee. A Kiplingesque mystery with an intriguing plot, lots of twists, sympathetic characters and convincing intrigue. This is the first in a series featuring Captain Sam Wyndham of Her Majesty's Imperial Police Force and his second, Sgt. Banerjee, commonly known as Surrender-Not. I've already read the second in the series, A Necessary Evil, and look forward to more of their adventures.
Trouble In Nuala by Harriet Steel. Set in the British Colonial period of the 1930s in Ceylon (now Sri Lanka), this first in a new series introduces Inspector Shanti de Silva, recently transferred from busy Colombo to the sleepy hill-town of Nuala, and Jane, his English wife, a former governess. I found this a quick, entertaining read with a well-paced narrative, a pragmatic protagonist, an interesting variety of characters, a dash of humor and a balanced look at the political and cultural differences between the Sinhalese, the Tamils and their British overlords.

Posted by jrlindermuth at 10:44 AM No comments:

No 'Peace On Earth' Until The End Of The Novel

(J. L. Greger, my guest today, is known for mysteries/thrillers with a scientific slant. Read on to see what she thinks makes for a good read.) 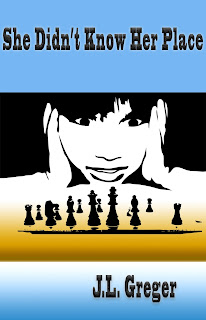 “Peace on Earth” is a frequent holiday blessing. However, readers don’t want “peace on earth” until the end of a novel. This is another way of saying that novels depend on tension.

In essence, the plot of a novel is a series of events during which a characters or characters resolve a problem or overcome adversity. A mystery at its simplest level is the discovery or a crime (usually a murder) and the determination of who did it and how.

Many authors accordingly believe their books need a victim, a protagonist, one villain, one investigator (sometimes the protagonist), and a few colorful sidekicks. They argue that books which include a number of additional characters are confusing. Perhaps these authors are correct. Their books are fast reads and often sell well.

But I think formualistic mysteries (or really any type of novel) are not satisfying for several reasons.
·         The end is too predictable. I like mysteries in which I’m not sure of the finale until the end. I also don’t like books with only one clear-cut villain. The “red herrings” need to be well developed and plausible.

·         The formualistic stories are not realistic. Life isn’t that straight-forward. We all face continual distractions. Although we respect the beauty of linear thinking, most of us make numerous missteps daily because of misleading or ultimately unrelated information.

·         Most problems aren’t solved by a single person in virtual isolation. Detectives work in teams and consult with crime labs, lawyers, and experts in various fields.

In other words, confusion is a part of most of our lives and should be part of novels. That’s one reason for subplots in novels.

I think the best books can be read at several levels. Teachers in high school and college literature classes drilled most of us on symbolism in novels, especially Moby Dick. Although many of those discussions seemed overblown, I think at least one character in a novel should have inner emotional turmoil. The swirls of confusion (self-doubt, anger, or regret) which swirls about this character at the start of the story should crescendo during the tale but be calmed by the end of the story. However, logical character development makes it unlikely the psychological profile of a character will change totally and the character’s issues will dissipate totally.

Finally, although we all wish each other “peace on earth,” most of us don’t want it in our novels until the last page. Some of us even like one unsettling note at the end of a tale to make us think. Think about that the next time you wish someone “peace on earth.”

You can win a free copy of my latest mystery—She Didn’t Know Her Place. GoodReads is doing a free giveaway of three signed copies. Enter before December 23
at: https://www.goodreads.com/book/show/36679089-she-didn-t-know-her-place

Blurb: In She Didn’t Know Her Place, Dana Richardson faces a dilemma in her new job. The Natural Resource Center, which reports to her, is alleged to be "doctoring" data to help industrial clients meet federal pollution standards. Her boss Guy Beloit, the president of State U, doesn’t care. Really no one, but Dana, cares. That's not true. Sally Stein cared and she died under mysterious circumstances.

Bio: J. L. Greger is a former professor in the biological sciences and research administrator. She likes to include tidbits of science in her thriller/mystery novels: Riddled with Clues (finalist for a 2017 NM/Arizona book award) and Murder…A New Way to Lose Weight (winner of 2016 Public Safety Writers Association [PSWA] contest). Her collections of short stories focus on families: The Good Old Days? and Other People’s Mothers (finalist for a 2017 NM/Arizona Book Award). To learn more, see her website: http://www.jlgreger.com